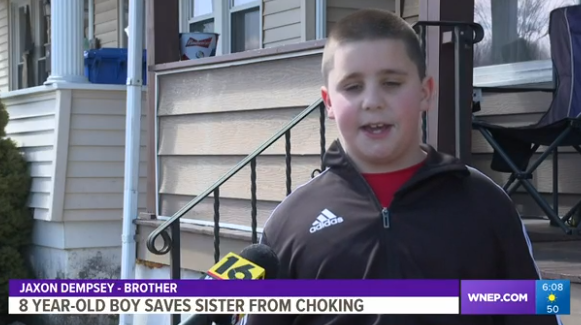 Whooda thunk it, an 8 year old saves the life of his 20 month old sister from choking because of John Cena?

Jaxson Dempsey was with his dad and sister after a trip to McDonalds, when Jaxson noticed his sister was choking a chicken nugget. As dad was pulling over, Jaxson went into action and dislodged the nugget by learning the proper way to perform the Heimlich maneuver.

The crazy part of this whole story is how Jaxson learned this…it was all thanks to John Cena. Jaxson was watching an episode of The Substitute where John Cena show the way to help someone choking.

“If I was by myself and Jaxson wasn’t with me, and I stopped and gave her a chicken nugget, I couldn’t hear her because she was choking. She wasn’t coughing; she wasn’t panicking. She just had no air going through; she wasn’t breathing…Thank God Jaxson was there because, without him, I don’t know if Lelia would be here.”

So how did John teach Jaxson and every other child watching the show?

Well, sometimes kids actually do learn something from TV