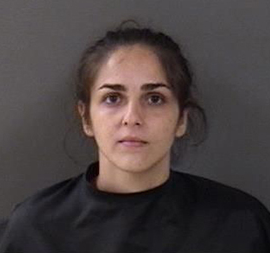 A lot of states have laws that allow for recreational marijuana. Other states only allow it for medicinal uses.

In the case of medical marijuana, it is like most all prescriptions. It is doled out by dispensaries with a prescription from a doctor.

In the state of Florida, Dakota and her Dad, Luigi, had a bit of an argument. From the way the police report reads, Dad was sharing his weed with some of his friends, but when Dakota asked, Luigi said “no”.

Now, if Dakota was small child, this could be a life lesson as to why drugs are bad…

…This could also be a lesson you can’t always get what you want.

Regardless, these lessons were lost on Dakota, as she seems to be a bit of a enthusiast, according to her social media pages.

I guess, because of her love of the sticky-icky, the police report said:

“Dakota attacked Luigi by pulling him down to the ground, and by attempting to grab his genitals.”

Keep in mind, Dakota is only 4′ 11″. Now she has a restraining order from Dad and out on bail.

Wonder how bad things would have been if he said no to borrowing the car.