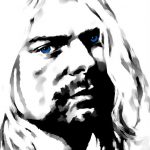 The 1959 Martin D-18E guitar Kurt Cobain played in Nirvana’s 1993 Unplugged performance sold over the weekend for a record 6 million bucks! The starting bid for the guitar was 1 million dollars. It was the highest selling item at the auction which included a few other Unplugged souvenirs, including a typed setlist and a couple of typed out lyrics sheets.