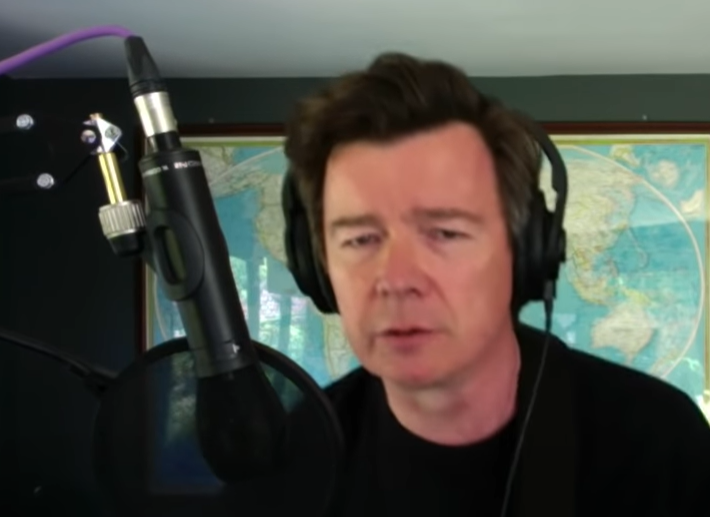 During the 80s Rick Astley was considered a cheesy pop star. In the 90s and 2000’s he was considered a joke, then he became something of an internet legend with a plethora of unsuspecting YouTube viewers being “Rick-Rolled” with a clip of his song “Never Gonna Give You Up”. Because of his internet fame, Rick Astley has become one of the coolest has-beens in music history…and has received a TON of credibility with Rockers around the world…he seems to have a special friendship with Dave Grohl, from Foo Fighters.

Not only does Rick Astley have a very special voice, but he also plays a bunch of different instruments, Drums, Guitar and keyboard. He was caught on camera in 2016, drumming and singing AC/DC’s “Highway to Hell”

While a bit cheesy, as you would expect, he was serious about his performance…I mean not only can he play drums pretty well, he can sing AND drum.

In 2017: Dave Grohl, as he does with many of his shows, introduces a special guest. In this case, it was Rick Astley, who was brought on stage to do a Foo Fighter’s kicked up of “Never Gonna Give You Up”. The results were nothing less than stellar…it was Foo Fighters, of course it was (Right, Jill?):

Fast Forward to  2018, Rick performed with Choir! Choir! Choir!, which is a Canadian duo who take popular songs and gather people to sing together in harmony. The results are amazing performances (Their Prince tribute is one that will make your mouth drop 1,999 people singing “When Doves Cry” after the death of Prince). After Rick sang his famous song “Never Gonna Give You Up” with the duo and gathered crowd, they asked him, who he would challenge to join Choir! Choir! Choir!. His answer “Dave Grohl”.

Fast forward, again, to last week (June 18, 2020) Rick returned the favor to Dave Grohl, by doing his own version of a Foo Fighters classic “Everlong”…and it is pretty damn good. If you haven’t heard it, yet, you really do need to hear it. If it is anything, it is respectful, it is not cheesy and very cool.

The guy took 20 years off to be Dad back in 1993, which you gotta respect. Maybe Dave can do some producing for Rick and Rick-Roll Rock N Roll, what do you think?