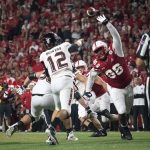 It only took 38 picks to happen, but Carlos Davis joins his brother Khalil in being taken in the National Football League Draft.

NFL Analys Lance Zeirlein says of Carlos, “Davis has NFL heft on the scales, but he’s short-armed and plays too straight-legged, rendering his size much less effective than it should be. He has some pop at the point of attack when he’s first with his hands, but he’s just not as quick off the snap as he needs to be. He has his share of wins against opponents when he’s playing in a phone booth, but his batting average of effectiveness plummets when he’s forced to play on the move.”

He ranked second on the team with four sacks as a senior while totaling 32 tackles.